You’ve got just a few more weeks to catch Noah Da Costa’s new show Concrete at the Gallery at NUA. Noah is the son of the painter Caroline Hoskin and grandson of the St.Ives sculptor John Hoskin. He studied at NUA when we were known as NSAD (1988-90) before commencing a successful career as a commercial photographer.

Represented by Tom Rowland Fine Art, this is Noah’s first major show in Norwich. It brings together a large number of his large format monochrome images, all derived from photographs of Denys Lasdun’s National Theatre or University of East Anglia (the campus of which was Noah’s home for a period as a child). While the main body of the exhibition consists of Noah’s large, square prints, the second room of the exhibition is a collection of newer, smaller and variously sized colour pieces.

In addition to the work itself, the gallery has a limited number of boxed prints available for sale, and two catalogues for the special exhibition price of £5 each. One of these features a foreword by myself, but the photos more than make up for it.

In 1995 OMA published S,M,L,XL. Consisting of more than 1300 pages and weighing 2.7kg, the book quickly joined the canon of essential postpostmodern texts on architecture, mostly for no other reason than it existed. Whatever content (see what I did there?) that Koolhaas, Mau and OMA included therein was buried in the detritus collected over twenty years of practice.

Architects are no strangers to monographs and S,M,L,XL re-invigorated the genre by proving that if a practice was going to publish a book about itself in the service of self-promotion, it might as well throw all the spaghetti at the wall.

On receiving Small: Thoughts and Projects by Carl Turner Architects, my first thought was that it might represent the first instalment in a four volume series. Covering the practice’s first seven years in one tenth the pages of S,M,L,XL, Small finds a different balance. Fifteen projects and seven ‘thoughts’ are categorised as urban, suburban or rural. The projects, all mostly built, range from the scale of low cost exhibitions to large domestic properties. The ‘thoughts’ are modest and jovial, clearly inspired by both teaching and the practice of both designing and making buildings.

The book celebrates not only the small scale of the projects therein, but also the small size of the practice itself. Smallness, fragility and the short-term are highlighted not as threats, but as opportunities for sustainable employment. Given that Carl Turner Architects has existed for only a few years longer than the current recession, it is undeniably the right of a practice to celebrate it’s continuing existence. Credited to the practice rather than its director (although the text regularly slips into the first person), the book makes a rewarding connection between the modest nimbleness of a small practice and carefully realised projects.

Although the Slip House (2012) may be amongst Turner’s more notable buildings (winning the 2013 RIBA Manser Medal and RIBA National Award, and featuring in an episode of Grand Designs), it was a pleasure to rediscover a few projects here in East Anglia – the Ochre Barn and adjacent Stealth Barn in Walpole Saint Peter (both 2011). These projects remind the reader of the tremendous architectural opportunities of the Fens: land is cheap (a hundred metre stretch of single street in the little village of Prickwillow is home to two early houses by Jonathan Ellis-Miller and one by Meredith Bowles) and old barns are less likely to have been gentrified. Not to mention the fact that the vastness of sky is enough to make you cry with joy and/or fear on a daily basis, making a perfect backdrop for houses as objects-between-land-and-sky.

The sub-£35,000 Stealth Barn is a particular favourite of mine, not so much  because of its low cost (having a contractor for a brother helps, according to a cynical acquaintance of mine) but because of the way in which it uses a set of pad-stone and brackets to plant the house on an existing piece of farmyard concrete hardstanding. In generational terms, I may be a child of Thatcher, but that means I’ve arrived late to the housing market party and all the decent habitable barns have been converted (Turner and his wife sold the Ochre and Stealth Barns to fund the Slip House back in London town). There remain, however, hundreds of these tough little patches of concrete throughout the Norfolk landscape, many of them obsolete. Carl Turner Architects popped a little black box on one of them and proved that they have enormous potential as cheap pad foundations for lightweight and low cost homes. Small, smart and beautiful in its simplicity.

The publisher provided the author with a complimentary review copy of this title. 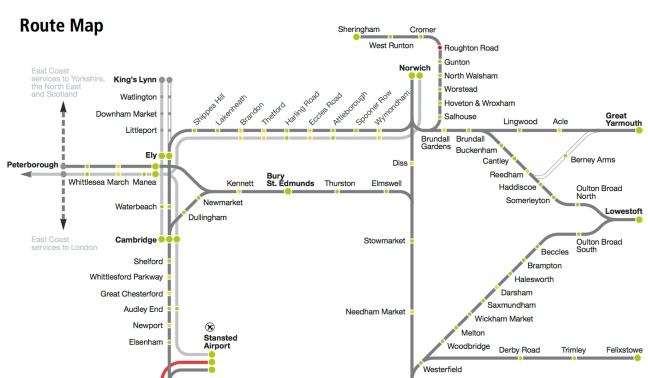 The trunk roads that connect Norfolk with the rest of the country are beginning to assert themselves on this blog as something of interest to me. How does rural architecture, both rural and industrial, manifest itself when there is no topography to speak of? How do domestic landmarks evolve alongside major highways? In order to maintain some editorial balance, it’s time to consider how Norfolk is connected not by road, but by rail.

Traveling by train to Norwich is, generally speaking, only marginally more enjoyable than driving. If the A11 and A17/A47 are there to punish drivers, then Greater Anglia and East Midlands Trains (EMT) are there to punish rail passengers. Greater Anglia, at least, have comfortable old fashioned (or just old) intercity carriages providing half-hourly conveyance to and from London, but they are motivated by locomotives drawing power from unreliable and easily collapsed electric wires. EMT does, at least, connect Norwich hourly with some of the bigger cities in the north of England, but it uses two carriage Sprinters to do so. By the time you arrive in Nottingham, Sheffield, Manchester or Liverpool, your torso will have adopted the baseline resonance of the Cummins diesel engine suspended beneath your seat.

Greater Anglia’s route map (above, ripped without apology in recompense for many hours of delays) uses a vertical line to illustrate Norfolk’s single mainline railway, connecting Norwich with London Liverpool Street. A handful of rural lines radiates from Norwich, including the Breckland Line to the next London-bound line at Ely.

On the map, the Breckland Line has been smoothed out to a horizontal line. In reality, it is absurdly twisty. It passes, for instance, not once, not twice, but three times under the A11 dual carriageway around Thetford. The line isn’t electrified, and a number of speed restrictions either side of half barrier level crossings hampers journey times. It takes eighty minutes to cover the sixty or so miles between Norwich and Cambridge, and that’s only possible by avoiding some of the lesser used stations. On the Breckland Line, there are five notable omissions. From west to east, with their annual estimated passenger numbers for 2010/11, are Shippea Hill (812), Lakenheath (404), Harling Road (3,494), Eccles Road (1,676) and Spooner Row (640). Most see only one or two trains a day each weekday and nothing on Sundays. Lakenheath is a strange inverse, with no weekday service at all, and weekend trains calling on request to provide access to the nearby RSPB reserve.

In each case, these are small unmanned halts that somehow (see their respective Wikipedia pages, linked above, for potted histories) avoided closure. Today they continue to exist in a state of limbo, in the closed circle of not generating sufficient passengers to warrant increased service, but not having sufficient service to attract additional passengers. With the competitiveness of rail journey times between Norwich and Cambridge already questionable, it’s no surprise that they have been sacrificed to appeal to intercity traffic.

In June 2013, the average price of a house in Cambridge was in excess of £350,000 (source). In Norwich the average was below £170,000 – less than half that of Cambridge (source). While Norwich may not appear to have the commuter draw of Cambridge, the city maintains almost five thousand park and ride parking spaces, supporting a veritable daily influx of commuters and day trippers. Between them, the five least popular stations on the Breckland Line, and the three (Harling Road, Eccles Road and Spooner Row) that shadow the path A11, might provide the infrastructure for a string of sustainable rural developments situated between the cities of Norwich and Cambridge.

Could it happen? Perhaps. Look to the top left of the route map above, and the twin grey lines connecting Ely with the East Coast Mainline at Peterborough. With the opening of additional platforms at Peterborough later this month, the remote Fenland halt of Manea, between March and Ely, will shortly be added as a request stop to most services on the two-hourly Peterborough-Ipswich train. Currently, up to six passenger trains an hour pass through Manea, but only four stop every day (and only then if a passenger requests it).

Like the five halts on the Breckland Line discussed above, Manea station is a forgotten remnant of the railway before Dr. Beeching. For years, it has languished without much attention on the edge of a village of 1500 people. Yet from 28 December, it will go from having four to twenty-nine daily trains to its nearest cities.

James is next speaking at...